Azoreans have always used the sea as an element of connection to overcome the emotional and commercial distances felt in the archipelago. Therefore, the history of maritime navigation in the Azores is long.

As a result of these dynamics, the Insular Navigation Company was established in 1871, a service that ensured regular inter-island maritime traffic and well as connections with Madeira and the United States for more than a century. In the 1980s, the inter-island maritime transport of passengers was interrupted, with the exception of the connections between some of the islands in the Central and Western Groups. However, approximately 20 years later, in the late 1990s, the investment in regional maritime transport of passengers was resumed.

As far as maritime transport of passengers in the Azores is concerned, one must highlight the dynamics between the islands that make up the Central Group Triangle — Faial, Pico and São Jorge — where, because of the three islands’ proximity, maritime connections assumed a special importance early on. And there are a number of companies that dedicated themselves to this activity in that region, among which stands out “Transmaçor – Transportes Marítimos Açorianos, Lda.”, established on December 22, 1987, as a result of the fusion of companies “Empresa das Lanchas do Pico, Lda.”, “Empresa Açoriana de Transportes Marítimos, Lda.” and “Transcanal- Transportes Marítimos do Canal, Lda.”.

Atlânticoline was established in 2005 by decision of the Government of the Azores. An exclusively public capital company that counts with the direct participation of the Autonomous Region of the Azores and the Ports of Azores.

Atlânticoline is committed to service excellence and, with a permanent staff of only five collaborators, became a ship-owning company in 2007 and a ship management company in the following year.

Focused on expanding its services to all islands, in 2008 – soon after the company’s establishment – Atlânticoline introduced regular connections between the islands of Flores and Corvo using the launch “Ariel”.

In 2009, the first high-speed craft was chartered – the ship “Viking”, later called “Hellenic Wind”. Still within this transport operation context, other boats were also chartered, namely the “Express Santorini”. 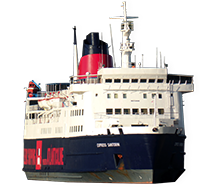 In the meantime, in 2011 the Regional Government becomes the owner of almost 90% of Transmaçor’s share capital in the Central Group.

The two maritime transport companies reinforce their partnership in 2014, a year marked by the introduction of two new ferries owned by Atlânticoline and chartered by Transmaçor to ensure the connections and the transport of passengers between the islands of Faial, Pico, São Jorge and Terceira. Also, a new chapter in the history of Azorean maritime transportation was open: the opportunity to transport vehicles between the islands of the Triangle every day of the year.

In 2015, Transmaçor merges into Atlânticoline, S.A., which henceforth becomes responsible for ensuring the transport of passengers and vehicles in the whole archipelago.

Currently, by means of a 65 permanent staff members, as well as 40 part-time seasonal collaborators, Atlânticoline annually guarantees the transportation of nearly 590k passengers and upwards of 30k vehicles.